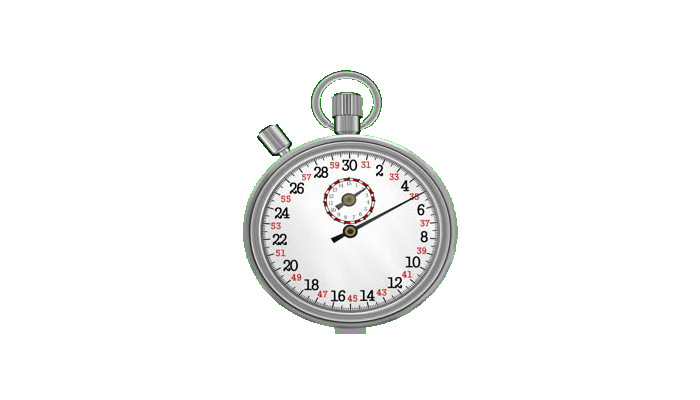 4.6 seconds : this is the average attention time that you could expect from viewers as they pass by screens. Quividi defines attention time as the duration during which a viewer had his faces turned towards the screen. This leaves little time no time to engage into long story telling, but more than enough to make an impact.

By construction, this value… is an average, as some screens can have an average attention as low as 1.5 sec, and others as high as 27 seconds.

This example is one of many that will be revealed in a benchmarking study that Quividi is preparing. Indeed, Quividi has been measuring over 150 screen networks since 2008 and 96 of them have accepted to contribute some anonymous data to a benchmark panel that we have created. This panel was built in such a way that no participating network would overwhelm others and each data point would be generated from a minimum of 8 screens coming from a minimum of 4 networks, thus ensuring both representativity and confidentiality, over 30M people from all around the world.

When it is published, the study will cover 18 typical situations, from a mix of 8 types of venues and 5 types of screen placements. The available data will consist of: 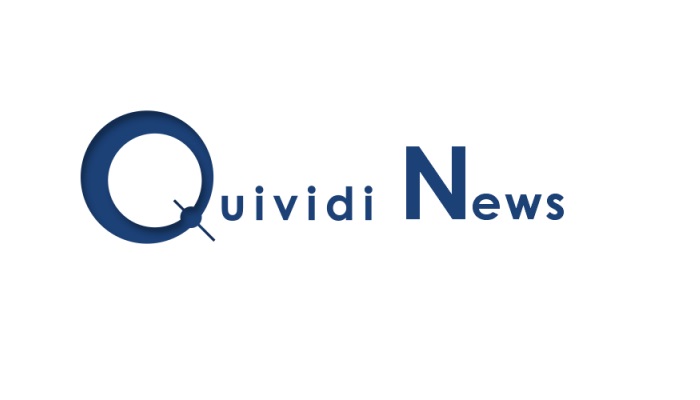 A test performed in Aug 2012 by McGladrey, in the USA to evaluate the accuracy of Quividi’s classification algorithms.

While the Quividi solution is mainly used for audience measurement and retail metrics in out-of-home places, there are some customers making innovative uses of our solution that is worth knowing about. Even more so when such research project received the prestigious Grand Prix at The 2012 Media Research Group (MRG) Awards, a few weeks ago.

Congrats then to Cog Research and Thinkbox who designed and implemented the ‘Screen Life: the view from the sofa’ research project, whose point was to understand the engagement of members of households used to watching TV while interacting with their smartphone or tablet – a growing tendacy also called multi-screening.

The 20 voluntary households which took part to the research were hosting several cameras installed in their loundge:

The study demonstrated that people in the sample were more likely to stay in the room or not change the channel during the ad break if they were multi-screening. As Neil Mortensen, Thinkbox’s Research and Planning Director, puts it: “Multi-screening is a huge benefit and opportunity for TV advertisers (…). It encourages people to watch more TV and more ad breaks and does not adversely affect ad recognition, and viewers now have the ability to act on what they see immediately”.

The Quividi solution is a simple software add-on to your digital signage network, designed to deliver a rich set of audience metrics. By just placing a standard video sensor on top of your screens, you’ll get to know :

Using state of the arts video analytics algorithms, the process records no image, no video and only delivers anonymous statistics.

Results are delivered in a private online dashboard and reveal global trends and interesting comparisons between demographics, sites, screens, business periods and more. The solution can also deliver campaign reports by just crossing results with your proof of performance reports.

At last, you will take advantage of Quividi’s exceptional speed and accuracy to get your loops to react in real time to the composition and behavior of your audience.

“The quality and depth of the reporting enables us to continually maximise the effectiveness of our content.” 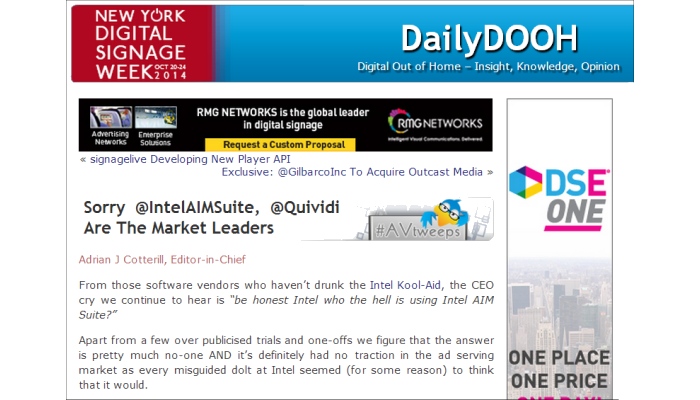 Paris – Aug 24th 2012. In a post called “Sorry @IntelAIMSuite, @Quividi Are The Market Leaders”, the most influencial digital signage online magazine asserts that in spite of a lesser share of voice than its behemoth competitor, Quividi is the most widely used solution in measuring the audience of digital signage networks.

Editor-in-Chief Adrian Cotterill, makes the point that out of the 44 CEOs from the leading Digital Signage industry he has interviewed, half a dozen are using the Quividi solution to measure their audience.

“Quividi has indeed measured over 180 digital signage networks across 36 countries since its inception” says Olivier Duizabo, Quividi’s CEO. “We’ve been able to experience many different situations and requirements which have helped us improve our solution for the benefit of our customers. We are confident that more and more major networks will be deploying our solution in the next 12 months”, he adds. 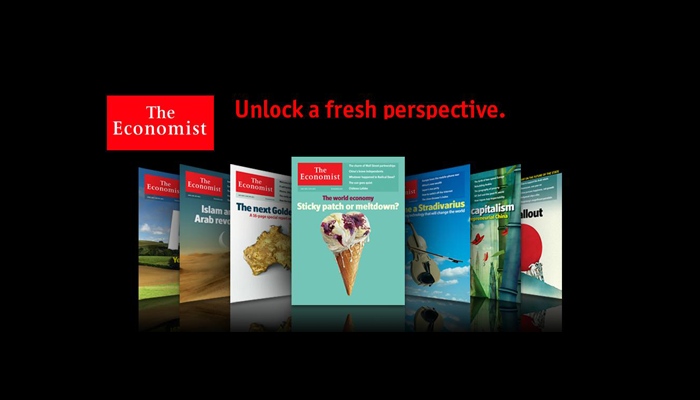 Quividi is one of the companies mentioned in the article “I spy, with my big eye“, published April 28th, 2012.

“As for businesses, Quividi, a French marketer, can measure the age and gender of passers-by who linger at an advert; advertisers vary their offerings based on who is looking” reports the article.

It is undobtedly flattering that Quividi is recognized as the pioneer and leader of automatic audience measurement; but let us remind in passing that, in spite of the article’s slightly Orwellian title, our solution does not record any image and doesn’t perform any form of recognition, so that customer privacy is always perfectly safeguarded. In other words: no spying around here! 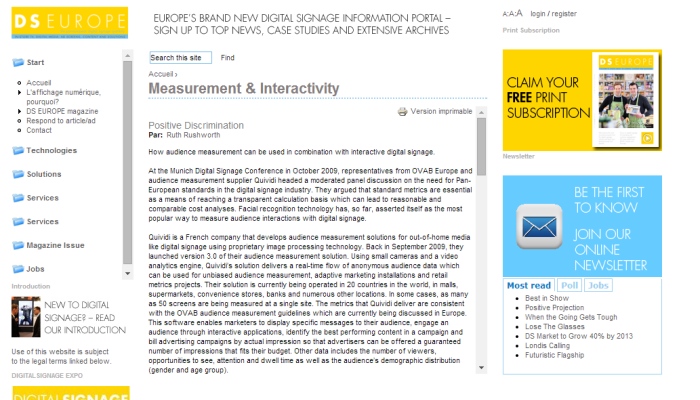 The Spring issue of the DS Europe Magazine, a European specialized publication, is doing a two page story on Quividi’s solution (pages 14-15).

The online version of the article can be found here.

The October-November 09 issue of the DDR Magazine, a leading British specialized publication, is doing a two page story on Quividi’s solution (pages 16-17).

The overall process, the various metrics, as well as a few customer applications are put in perspective.

The online magazine can be found here.

Paris, June 2nd 2008 – The New York Times featured Quividi in an article entitled “Billboards That Look Back” by Stephanie Clifford. On its publication date, Saturday May 31st, the article entered the “top 10 most emailed” list. The text included quotes from an interview with one of Quividi’s founder as well as photos and commentary on an ongoing audience measurement installation active at the time in Manhattan.

The article has sparked a lot of inquiries about Quividi and has been syndicated in various forms on both online and printed international media. Further interviews have been solicited by newspapers such as the Washington Post and Abu Dhabi’s The National, as well as by KCBS radio in San Francisco.

Such international media coverage comes at a very timely moment for Quividi, which is entering the North American Market and aggressively expanding its marketing operations worldwide.

Unsurprisingly, some editorial angles have stressed more the “social acceptance” factor of automated audience measurement rather than its technological aspect. In this regard, Quividi would like to state once again that VidiReports has no impact on privacy. The camera images are never watched by anyone. Images are analyzed in-place and in real time by a computer and only quantitative and non-nominal qualitative data are extracted. Those data are automatically aggregated and can not be used to infringe on anyone’s privacy.

Quividi announces that its VidiReports product was awarded the prestigious “Oscar 2007 de l’innovation”, from LSA, the leading retail magazine in France.

LSA identifies, at the end of each year, 9 innovations that marked the year, through a rigorous selection process which associates editors, retailers and manufacturers.

VidiReports was selected in the “Shop equipment” category. The eight other laureates included well-known brands such as Coca Zero, Nintendo Wii, FNAC.COM, Monoprix and Géant Casino, which were also selected for innovating in their own categories.

All the laureates are making the front page of the Dec 13 issue.